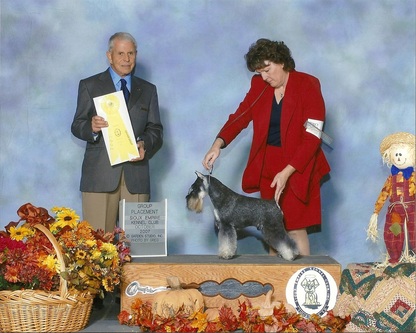 ToMar dogs are not only nice to look at but they are also fun to live with and excellent to work with. Ali has a total of 24 titles: 20 from the American Kennel Clive and 4 from the United Kennel Club.
Handled by Mary Paisley in the bred by exhibitor class, he began his conformation career at the age of 9 months. In a month and a half, this 10 month old puppy won a terrier group out of the classes and became a breed champion! His entire show career was only four months long and yet he managed to win 23 Best of Breeds and an additional 5 terrier group placements.
He began his performance career at the age two. Within a year, he won companion dog and companion dog excellent titles from both the American and United Kennel. His performance was flawless, attaining all 12 qualifying legs with not one non qualifying score. His wins included 7 first placements and 3 second placements. At the age of three, Ali began his most joyful career of all. . . Agility! To date, he has 17 agility titles, including 2 Master Agility Championships. He frequently places in the ribbons and has qualified for the national Agility championships for the last three years. What now? Ali is currently working toward his third MACH, obedience Utility Dog and Tracking Dog titles. "Bring It On" proved to be an appropriate name for this ToMar boy!