ToMar Miniature Schnauzers are owned and loved by Mary Paisley of Wisconsin, USA. The Kennel was started in 1985 and since then has gained recognition from around the world.

It all started after purchasing a Miniature Schnauzer which competed in the Obedience and Agility fields. Whilst at a competiton, a glance into the conformation ring was all it took to investigate further, leading to the purchase of the ToMar foundation bitch Am, Can Ch Minuteman Wensday Addams. Wensday was the first Canadian bred Miniature Schnauzer to win a Group 1 in the USA and proved to be invaluable in producing her stamp right through the ToMar line and in the dogs being shown today.

Keeping the kennel small with a vision of quality, not quantity, on average only 2 litters are born here each year, often producing 2 or more champions from this.

To date, the ToMar Miniature Schnauzers continue to make history, their achievements include; 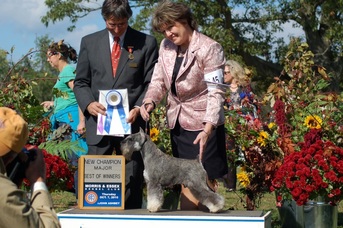 Captain is the new budding star at ToMar. He will be shown sparingly in 2011 - however you'll know when you see him. He's hard to miss! 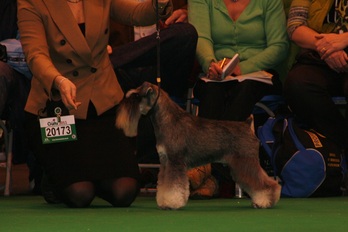 UK Ch ToMar's Two Thumbs Up to Zakmayo winning Reserve Dog CC at Crufts 2011
In 2008, Sizzle, a promising young male puppy was exported to the United Kingdom and became UK Ch ToMar’s Two Thumbs Up to Zakmayo. He enjoyed considerable success and to date has won;
4 x BIS (Schnauzer Club Shows)
At All Breed Champ Shows – 3 x Grp 1, 2 Grp 2, 1 Grp 3, 19 BOB, 20 CCs and 8 Res CCs (where total show entries exceed 11,000 dogs)
In 2009 he was Top Miniature Schnauzer and Number 5 in the Utility Group and also Top Sire (top puppy sire in breed)
In 2010 he was shown only 5 times and ended as No2 Miniature Schnauzer behind his daughter and Top Stud (top adult sire in breed).
At Crufts 2011 Sizzle won the Reserve Dog CC. Also in 2011 Sizzle was again Top Stud in breed and No2 in the Utility Group.
An outstanding achievement, both a top show dog and a top producer.

Am, Can Gr Ch ToMar's The Fix Is In 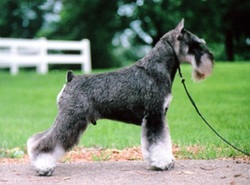 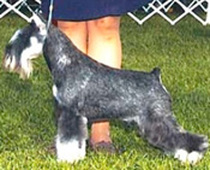 Spike's show career includes the following achievements;
2002 and 2003 - Best Of Breed and Best Bred By’  at the International Eukanuba Show, 2002 and 2003
5 BISS, 8 group Ones, 4 group Twos, 5 group Threes, 5 group Fours
Award of Merit Westminster, Award of Merit Montgomery County
Twice Best Veteran in Sweepstakes followed by a Group one in Veterans.

Am Ch ToMar's Sassy Yet Classy 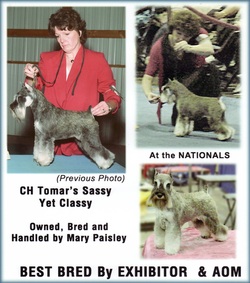 Am, Fin, Swe, Est Ch ToMar's What Ever 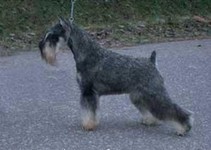 Am Ch ToMar’s What Ever was exported to Finland and added a Finnish, Swedish and Estonian title